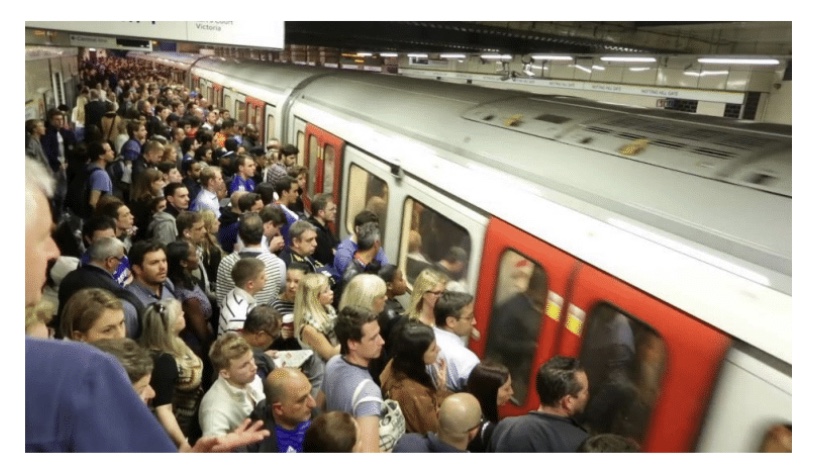 Question: Write a description suggested by this image

Cocooned within the sanctuary of my train cab, the noise is somewhat dampened, but, looking out of my window, I can see them. Hundreds of them. The passengers. I imagine, as I do every morning during rush hour, the way in which they resemble the hyena and wildebeest that belong to the sweeping Serengeti. Jostling to the front of the queue, these hyena, with snarling smiles, push the smaller passengers out of the way. One hyena, with a claw-like umbrella, pokes an unsuspecting gentleman, causing him to squeal in anguish. Sensing danger, the wildebeest clamber to the back of the queue and the crowd, alive with movement like a flag rippling in the wind, divides itself in two. With almost tingling expectation, the hyenas move closer to the front, eager to see the train doors open, and the wildebeest, downtrodden and slouching, move further and further away.

Shifting in my seat, I look out of the opposite window and notice one particular wildebeest who I see each morning. Dressed in a wrinkled business suit, his nervous eyes dart around the platform, hoping to spot a pathway to the door, but confronted with the vast hordes of hyenas he instead resigns himself to missing the train. With a deep sigh, he seems almost to crumple into a seat at the back of the platform. With nothing else to do, he takes out of his bag what appears to be a plain lettuce sandwich and begins to nibble around the edges. Suddenly, there is a rush of people from the ticket office and a mass of hyenas surge through the doors, looking to pounce on unsuspecting wildebeest as they claim their rightful place at the top of the railway food chain. Almost as though it’s in slow motion, I watch one hyena bump into the lettuce-eating wildebeest and notice his half-eaten sandwich fall to the floor. With head bowed and a despondent look, he picks the sandwich up, dusts it off, and carefully places it back into his bag.

As I fire up the engines and the train booms with a lion-like roar, I recall when I used to work night shifts. Under the cool silhouette of a polkadot sky, I would often leave the window of my cab open and enjoy the soft caresses of the rippling breeze. There were so few people. No hyenas. No wildebeest. The soft echo of each footstep floated across the empty platform and crinkled newspapers, discarded hours before, fluttered aimlessly across the concrete. To most people this would be a lonely existence, but to me it was bliss. I would often arrive twenty minutes before my shift and just sit in one of the many empty seats, like the one now occupied by the lettuce-eater, and watch the trains amble through the station. There was no urgency, no clamour, no rush. My ruminations were interrupted by the blaring of an alarm that seemed to slice through my mind. It was time to open the door.

One minute to departure.

The crowd, hyenas first, heaved onto the train, the noise of their heavy footsteps ricocheting violently throughout the carriages. Looking into my CCTV monitor, I watch as the hyenas fight one another for the best seats. Two especially boorish specimens confront one another, one almost circulating the other, eyes glinting and teeth seeming to flash across the screen. I watch intently, hoping I won’t need to intervene. Hyena No. 1, a villain if ever I saw one, prodded Hyena No. 2 and, in a show of dominance, threw his suitcase onto the desired  chair. Recognising defeat, Hyena No. 2 sloped away and, with no seats remaining, stood in the vestibule. Hyena No. 2, dominated and outmatched, had transformed before my eyes into just another wildebeest. Shaking my head, I closed the doors, pounded the gearbox and sounded the bell.

Another day begins, as I journey into the wild.